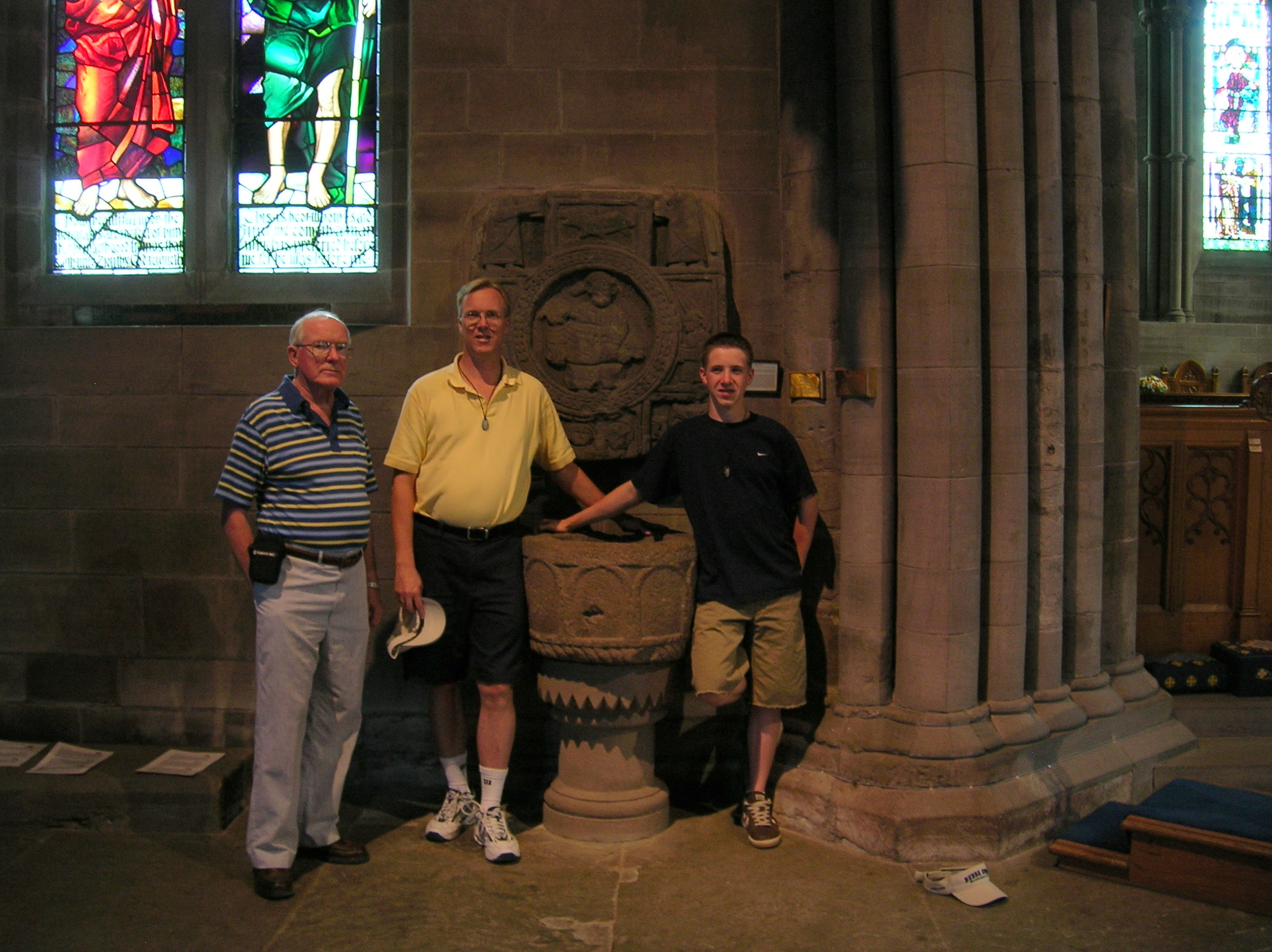 The following was complied and edited by Ann Cheney and Ken. Much of it was taken from several articles written by Alan Junkins in the JFA newsletters. Other portions were taken from various web accounts; links to several of these accounts and others can be found at the end of this page.

William Jonking lived in Balglassie, a hamlet in Aberlemno parish, Angus county. Aberlemno is adjacent to Careston parish and Brechin parish.  Balbinny was the farm at Balglassie where William lived. BAL comes from the Scottish Gaelic "baile" meaning home, farmstead or town. The names Balglassie and Balbinny then would mean home of Glassie or home of Binny. Glassie is an ancient Dalriadan-Scottish nickname for a person with gray hair. The surname Glass is derived from the Gaelic word glas, which means gray, however, it may also be a shortened Anglicized form of the surname MacGille Glais, which means son of the gray lad. The Binny name is ubiquitous in the area, therefore it would stand to reason there would be a Binny farmstead.
The Maull/Maule name was also well known in the area. Patrick Maule, born in Angus, was pageboy and subsequently Gentleman of the Bedchamber to King James VI. He was made the Earl of Panmure in 1646. Elspet Maull may have been a cousin to Patrick. Some genealogies have her listed as daughter of Francis Stanhope, Countess of Panmure and half sister to George Maulle, 2nd Earl of Panmure. The spelling "Maull" comes from the reference to William Jonking and Elspet Maull in the Brechin church records and is only found there.
How William and Elspet met, we have no idea of. That they met is an indication of their standing in the community. If, in fact, Elspet was related to the peerage, then William most certainly was not a simple stable boy or farm hand. He may have been head of the farmstead in some capacity, or may have owned some of the land. Many of the parish records were destroyed during the civil wars.

The first recorded reference to a church in Brechin is King Kenneth II of Scotland (971-995) giving ‘the great city (ie. monastery) of Brechin to the Lord’, endowing the monastic community with lands and having a church built. Thus by the 10th century a sizeable and significant ecclesiastical establishment was already extant.
Brechin was the mother church of the provinces of Angus and Mearns.
The present cathedral had its origin in the founding of the Diocese of Brechin by the appointment of Bishop Samson by King David I in the mid 12th century. A new church or alterations in the Norman style were made to an existing church and it was not until from about 1225 that the Culdees and their Prior were replaced by a chapter of Canons and a small Cathedral built in the Gothic style. This, the present building, was completed over the next few centuries with the major work done in the 13th and 14th centuries. After the reformation the building was neglected but it is generally agreed that even greater damage was done during the reconstruction of 1806. At this time the chancel, being unused, had fallen into disrepair and side chapels were demolished. A ceiling was put in the nave and galleries formed to house more worshipers. This latter problem was resolved when the building was restored to almost its original state (1900-1902).
The Diocese of Brechin was founded about 1150 with the first mention of Bishop Samson. Most of the earlier bishops of Brechin made little impact on history. The small and scattered size of the mediaeval Diocese of Brechin meant that it was never particularly wealthy. By the fifteenth century many lairds had their own chaplains or patronized local friaries.

Lutheran ideas from Germany and the Low Countries began to infiltrate the Angus and Mearns area during the 1530s through North Sea trading links. Efforts to reform the old Roman Catholic Church led to a politico-religious clash between the church authorities and the lairds of Angus and the Mearns during the 1540s and 1550s. The Protestant lords led a revolt against French and papal domination during 1559-1560. The mass and the authority of the Pope in Scotland were abolished by the Reformation Parliament in 1560. The civil unrest following the introduction of a new Scottish Prayer Book in 1637 led to the abolition of Episcopacy in 1638. The religious wars that followed ended with the Cromwellian occupation of Scotland from 1651 to 1660. The Restoration of Charles II saw the re-establishment of Episcopacy in the Church of Scotland in 1661. Episcopacy was disestablished in July 1689 as the form of church government of the Church of Scotlandand was replaced by Presbyterianism.
But, in the early 1600's, the church in Brechin, which encompassed all of Angus county, was Episcopalian.
The Wedding of William Jonking and Elspet Maull

Sometime prior to 1621, William Jonking and Elspet Maull attended a meeting of the Session of the Brechin Cathedral and indicated their intention to marry. They were expected to be able to repeat the Lord's Prayer, the Apostles' Creed and the Ten Commandments. On the three Sundays thereafter their names were proclaimed in church. Then, it was the duty of the Session Clerk, for a fee of twelve shillings, to enter their names in the "Session Book." It also was the Session Clerk's duty to keep record of marriages actually solemnized. Once the contract was made, William and Elspet needed to hold a wedding within forty days and in order to show good faith they had to find two witnesses who would deposit the sum of five pounds each with the Session.

All weddings had to be solemnized in the church and on fixed days, Tuesdays or Thursdays, between ten o'clock and two o'clock in the afternoon. If the wedding was arranged for any other day it would cost an additional twenty shillings to the Session. At times when there were several weddings at the church on the same day, there could be quite a disturbance. There was a superstition that luck attended the bride who first went out the church door, and the scramble of, "hurling her to the door," could be far from edifying, but if they did not stay until the Blessing was finished the civil magistrate was empowered to go to the house where the wedding dinner was being held and apprehend the bridegroom and bride and imprison them.

We have yet found no specific entry in the church records for the marriage of William and Elspet. However, they would not have been able to Christen their children were they not in good standing with the church.

On Monday, December 24, 1621, William Jonking and his wife Elspet took their new baby to the parish church in Brechin to have him baptized. The Reverend Alexander Bisset, minister of the Brechin Cathedral, Angus County, Scotland, performed the service. James Watt, Clerk to the Session, recorded the event in the first volume of the Brechin Cathedral Parochial Register, where he had been recording such events since his appointment as Clerk of Session in 1615. He wrote the following:

The Register is now in safe keeping at the New Register House, Edinburgh, Scotland.1

English parish registers as a general rule record baptisms rather than births. Although birth dates were entered during a brief period during the Commonwealth and, in certain northern dioceses in the later eighteenth-century, these were the exceptions rather the rule. In the sixteenth-century, the Anglican Church ordered parents to baptize soon after birth. For example, in the Prayer Books of 1549 and 1552, it was written that ‘The pastors and curates shall oft admonish the people that they defer not the Baptisme of Infants any longer than the Sunday, or other Holy day next after the child be borne, unless upon a great and reasonable cause declared to the Curate.’ Similarly, in the early seventeenth-century, William Gouge wrote that ‘it is not meet for Christians to defer the baptizing of their children beyond eight days.’

"carretston" or Careston is about four miles west of Brechin in Angus County, Scotland. It did not have its own parish church until about 1714.2 Before that time, the people of Careston went to the Brechin Cathedral to hear the preaching on Sundays and Tuesdays, brought their newborn to be baptized, and went there to be married. In 1851, Careston had a population of 218.

Careston is where Robert Junkins and his sister, Agnes, were born and as far as we know, spent the first years of their lives.

Robert Jonking spent his first 29 years in Brechin. There is no record of either he or his sister marrying there. Because Robert signed his will with an "X", many have assumed he was illiterate but it is quite possible that he was, in fact, educated.

The grammar school of Brechin in the early 1600s offered both elementary and advanced instruction for boys. Instruction in Latin, both language and literature, was the major part, but instruction in religion also occupied an important part. The laws and constitution of Scotland required that all boys be brought up and instruction in the fear of God and good manners. In the 1560's the Scottish Parliament pronounced that it would not be good for either their bodies or their souls if God's word was not rooted in them.

The school day was inordinately long. Six o'clock in the morning to six in the evening with a two-hour break. At Brechin, the school year was divided into four quarters beginning on February 2 and divided at May 1, August 1, and November 1. All pupils had to pay seven to 13 shillings per quarter, depending on whether they lived in the town or outside the town. The school fees were regulated by the Town Council, but were paid directly to the schoolmaster. The sons of poor parents were not kept from enrolling at Brechin Grammar School, if their ability or ambition inspired them to seek learning. The Church directed that "care be taken for putting all the children of the parish who are capable of instruction to schools, and that such amongst them as are poor have their quarter payments paid by the Session out of the penalties." The boys of the Grammar School were obliged to attend both services in the Church on Sundays and to sit with the schoolmaster in the pews allotted to their use. As part of their training, the boys of the Grammar School were called upon to repeat a portion of the Catechism in the Church every Sunday.

The JFA contributory web site
going away, being converted into this website

The JFA Genealogy Database
soon to be member only access

The Robert Junkins timeline
in development